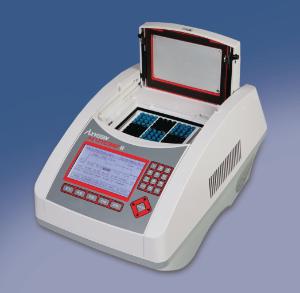 A variety of applications from single temperature soaks to sophisticated multistep programs can be performed with the MaxyGene II. All of these are easily set up. The time or temperature of a cycling step can be automatically increased or decreased during successive cycles. This is useful for 'touchdown' applications and for extending annealing times as enzyme is depleted. Programs may also be paused while running. During operation, actual times and temperatures are displayed. Estimated run times are automatically calculated and a log of the last run can be displayed or downloaded to a printer or PC.

Well spacing in the MaxyGene II block is compatible with both thin walled thermal cycling plates and 0,2 ml strip tubes. For best fit and performance, the use of Axygen® thin walled polypropylene plates and tubes are recommended. Individual 0,2 ml tubes may also be used.